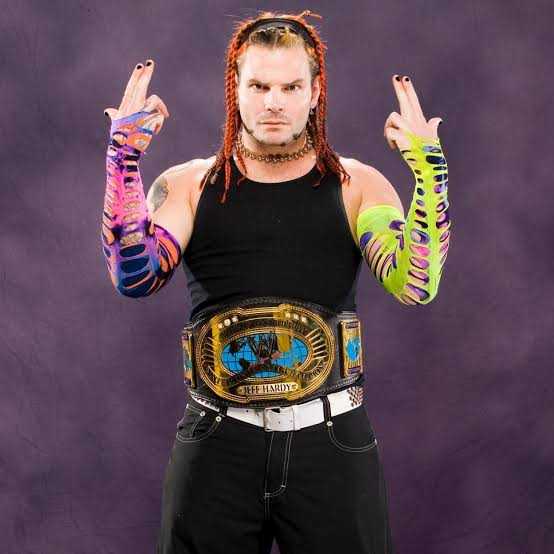 Jeff Hardy began his journey in WWE wrestling in 1994 as a 16-year-old teenager.

He was born in Cameron, North Carolina, United States of America. He was born on the 31st of August, 1977. He started wrestling early in his life, and he co-created the OMEGA and TWF (Trampoline Wrestling Federation) with Matt Hardy, his brother. They promoted their wrestling via this outfit.

Born to Ruby Moore Hardy and Gilbert Hardy in North Carolina. He has one sibling, Matt Hardy, and they are both into the sport of wrestling. His mother, Ruby Moore Hardy, died from brain cancer in 1986.

Like his daring style of wrestling, he loved racing with bikes from his childhood. Bike racing is adrenaline-pumping, but young Jeff Hardy got joy doing it. At only 13 years old and in the ninth grade, he partook in a bike-racing tournament.

Jeff Hardy also played baseball while growing up. However, he had to quit after he broke his arm during a bike racing competition.

Jeff Hardy attended the Union Pines High School in North Carolina. He loved art and learning about the history of the United States of America.

While in high school, he had discovered his passion for wrestling. This passion pushed him to compete in amateur wrestling. He participated in other sports like football, where he played as a linebacker and fullback. However, his love for wrestling superseded all.

This love for wrestling made him make the easy choice of dropping other sports to become a professional wrestler.

Unlike his brother, Matt Hardy, Jeff Hardy doesn’t have a record of attending college or university.

Jeff Hardy is currently married to Beth Britt. He first met Beth in 1999, and they started dating. He also dated Mickey James, but he eventually got married to Beth on the 9th of March, 2011.

Their second daughter, Nera Quinn Hardy, was born on the 31st of December, 2015.

The couple is still together, as at the time of writing this.

However, his contract got suspended on the 22nd of April, 2003. Due to drug-related offenses and unofficial conduct.

He joined TNA (Total Non-Stop Action Wrestling) on the 23rd of June, 2004. Where he fought A.J. Styles on his debut.

He returned to WWE on the 4th of August, 2006, and he marked his return with a victory against Edge. He went on to defeat John Morrison a week after his return, to win the Intercontinental Title (his second).

Some of his achievements include,

He also has personal awards to his name. They include,

The year 2000 Tag Team of the year winner

His rang names include,

Jeff Hardy drinks Alcohol but it is not on record that he smokes. He also has some favorite things like everyone else.

Jeff Hardy has a lot of love for music. He has a music career, and he is good at it. He has a couple of albums to his name. The plurality of worlds was dropped in 2013, and similar creatures dropped in 2012. He also created a band named PeroxWhy gen band in 2003.

Asides from music and wrestling, he also loves painting, the arts, and writing poetry. Outside his music recording studio, he built a 30-ft statue which further showcases his artistic side.

He loves good cars and in his car collections, you will find quite some cars. In his garage, he has the Chevrolet Corvette C5, Lamborghini Aventador, Nascar Replica Truck, and the Cadillac Escalade.

Jeff Hardy has had his share of controversies, like his brother. On the 17th of September, 2008, he was stopped from taking his flight at Nashville International Airport, after officials found him intoxicated.

On the 11th of September, 2009, he was caught with a high amount of drugs. In his house, the police found 180 pills of Soma prescription, 262 pills of Vicodin prescription, anabolic steroids up to 555 milliliters, paraphernalia, and a good amount of cocaine.

He was arrested again on the 10th of March, 2018. This time for his involvement in an accident issue. The authorities revoked his driving license for 30 days.

One thought on “JEFF HARDY”